I am sitting in my bedroom currently very depressed, because the most special carefree weekend of my life slipped away in a matter of a couple of blinks. It’s so hard to transition from a dreamy musical wonderland full of color back to the drab reality of responsibility and school. Coachella was a sweet escape and I wish it was my reality, and I want it to be, but I know it can’t be. Yesterday was our last day and it was absolutely wild. Here’s who we saw:

Krewella 5:00-6:00: Cairo was dying to see Krewella so we ran into the Sahara tent and got up close and raved. It was an awesome show and I recommend going to see it if you know their music
After Krewella we rushed over to the food court (which if you haven’t been to Coachella is endless and overwhelming with its infinite possibilities ranging from chicken and waffles to ice cream and waffles. We got awesome fish tacos and were chilling on the ground when some random guy came up and started talking to Cairo and then burned her armed with his cigarette! Um excuse me, so rude and unexpected. We had quite a few strange encounters this year. For one, when we were walking over to the Sahara tent on Saturday some weirdo guy who was sweating profusely came up to me asking him if I remembered him from Vegas and his friend grabbed my face and went in to kiss me but I leaned back before he could make the move. Yikes who knows what kinds of STD’s those guys were spreading around. During Skrillex, there was a strange man on some sort of extreme drug wearing a unicorn mask thing and dancing around like he was in a dream land. He was standing directly in front of me doing some strange disco moves and oohing and was facing me dancing, instead of the set of Skrillex. I asked him if he wanted to turn around and actually watch the show but he said he didn’t need to, so I let him do his thing.

Cairo and I met up with Shelby during Calvin Harris 7:20-8:25: THIS WAS HONESTLY one of the best shows. Located at the Coachella stage (which was the biggest venue there and was outside in the heart of the festival grounds) Calvin Harris literally made the crowd go wild and the grassy field shake with excitement. It was one of the busiest shows there was and I felt on top of the world dancing with Shelby and Cairo who were both feeling just as extremely carefree and happy as me as we jumped and danced to all of his amazing songs, our energy bouncing back and forth between each other. I went insane when he played “Feel So Close” as well as “(I Don’t care) I Love It”

Lana Del Rey 8:15-9:05: This was the show I was most looking forward to all weekend. Lana Del Rey is the epitome of perfection. Her music, lyrics, her style, everything about her as an artist is like nothing I’ve ever seen before. She has this exotic, feminine look to her and a velvety voice that is addictive. Her range is incredible and she’s got this fuzzy low tone that is extremely sensual and can put you to sleep; it is rare that a female can sing so low and so strongly and I absolutely love her sound. When she came on stage I started to cry out of joy and shock, I couldn’t believe I was seeing her live. I love her so much. She was so calm and relaxed on stag and she moved about so gracefully and took off her heels and then politely asked if she could smoke a cigarette on stage, saying she couldn’t think without it. Her venue was quite short because she came on a bit late, so that was extremely sad. BUT she made it so worthwhile. She started off with one of my favorites, “Cola” and introduced us to her new song, “West Coast” which I can’t stop listening to now. My favorite songs from her are definitely, “Cola” “Without You” “Born To Die” “Body Electric” “Off To The Races” “Million Dollar Man” and of course all of her most popular songs. Two of my favorites that are unreleased are called, “Queen of Disaster” and “Burning Desire”. Look them up on Youtube!
I almost got trampled and suffocated to death while trying to leave Lana’s set, it was absolutely insane. BUT Lana was worth every painful foot stepping to each time my face got pushed into the sweaty arm of a random dude to every “sardines in a can” moment in general.

Disclosure 9:35-10:35: started right after Lana at the same stage and Carina (our friend), Cairo, Shelby and I chilled in the grass and listened to “When a Fire Starts to Burn” as well as “You and Me” which are two of their biggest hits.
Then we walked over to see…

Jhene’ Aiko 10:00-10:45: I did not know Jhene’ Aiko very well but Cairo and Shelby really enjoyed her so we went and I was pleasantly surprised. She had a beautiful soulful voice and her music was amazing. She brought out surprise guests CHILDISH GAMBINO and DRAKE which was awesome as well. Seeing her singing up stage sipping her tea and sitting on a stool made me really feel for a moment that I wanted to be up on that stage, singing for all these people and that I was wasting my time in school learning things to get me into college when I could be focusing on things I am really good at.

Duck Sauce 10:25-10:35: Cairo, Shelbs and I walked over to this crazy DJ at the Sahara Tent and picked up some delicious popsicles (Blood Orange for me of course) and decided to head over to Arcade Fire instead because we were tired, but this DJ ended up apparently being the best so I recommend you go if you’re going weekend one.

Arcade Fire 10:20-11:55: they sounded pretty good from what I heard, but we were really just relaxing far back on the grass soaking in the last bits of ‘Chella we could get before we had to leave.
Walking back was very difficult and I tried to look around and enjoy as much as I could, knowing I’d have to wait an entire year to return to this beloved haven of sweetness and music. I will miss you forever Coachella 2014. You were too good to me.

^^ ummm this is called being a DEDICATED FAN. LIV LUV LANA FOREVER 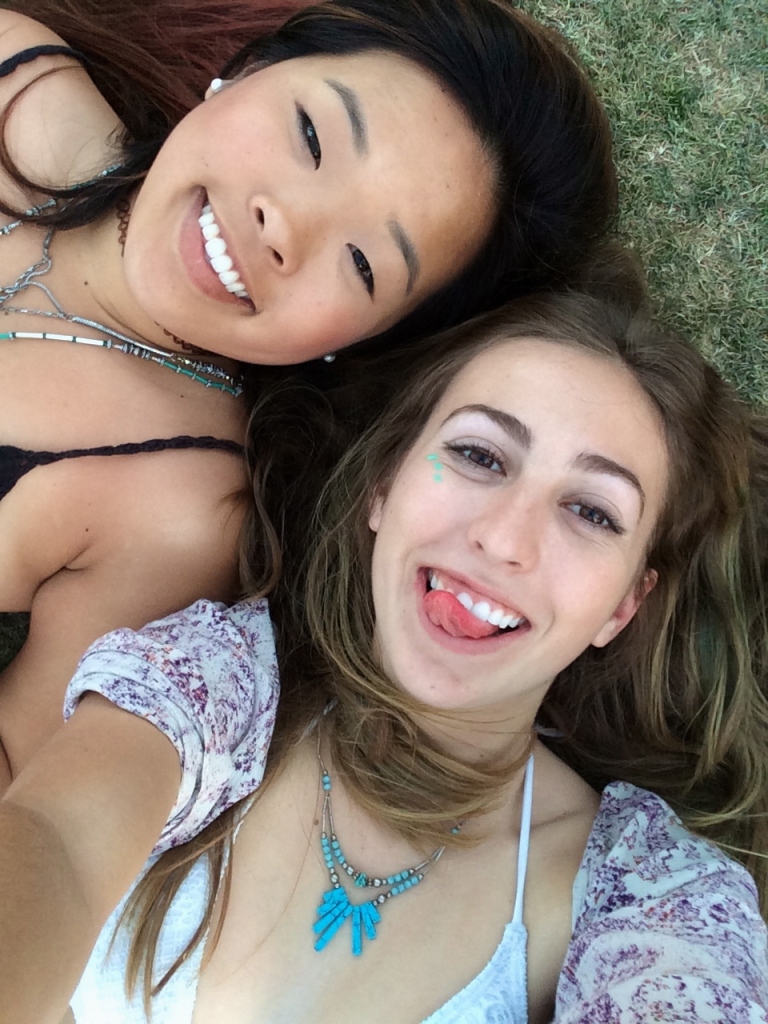 ^^ umm did I saw it was packed during Calvin Harris?

^^ Cairo,me and one of my best friends Serena! Check out her adorable gardening/creative outlet blog here: http://gardensandgnomes.wordpress.com !! She’s a newbie but her posts are hilarious and quirky be sure to follow her! “Am I allowed to smoke on stage?” she asks… why YOU CAN DO WHATEVER YOU WANT BABE

^^ found that somebody had written Happy Coachella out in glow sticks on the ground and thought it’d be an adorable picture if we laid down in the grass next to it. Shelby and Cairo thought it would be ridiculous and we would look stupid since people were trying to take pictures of it but I forced them into the dirt with me and voila! Not too bad and you can see what I was envisioning, right?