I am snacking on a banana with almond butter whilst listening to my girl Zooey Deschanel sing through my earphones (look up her band, She & Him) as lots of fit, tanned girls 30 feet from me are playing a game on the sand volleyball court outside my dorm window and I’m avoiding looking at them because the minute I turn around to walk back to my bed I’ll be faced with my reflection in my FAT mirror, which would induce a terrible compare and contrast situation.

I woke up about an hour ago (so did Maddie) and I realized that I am not indestructible and the freshman plague would not surpass me, as I sound like a cat scratched up my throat last night or something. But, this is nothing some vix and sleep can’t remediate because luckily it’s just a small cold. My goal 5 minutes ago was to start my 2-page “Industry Report” on the creative industries for my digital media class, but I decided I’d blog instead because I love to procrastinate and to egotistically write about myself instead of other people. Also, last night Maddie, Veronica and I ordered in some Domino’s pizza and lava cakes and indulged as we watched the Sex & The City movie and OBVIOUSLY seeing Carrie blog/journal inspired me to do the same.

Side-note: I would like to say that I have purchased the most delicious-smelling body wash from Caress that is called “Evenly Gorgeous” and it smells like every sugar and spice and everything nice you could dream of, so I suggest you lather up to the smells of this as you stand in a 3 foot wide shower stall clogged with pubic hair listening to the girls in the stalls next to you talk about what outfits they will wear for ZBT’s party tonight. Anyways, I just thought I’d share this in case anybody is looking for a new, exfoliating body-wash to add to their hygiene regimen.

I decided that today I will be cutting breads out of my diet temporarily because of the alarming amount of calories I have consumed lately.

Chili cheese hot dog wrapped in a bun thingy that was so ridiculously yummy looking, so I ate it even though it was 500 calories

And then we got dominos and lava cakes at night

And then I don’t even want to report the other things I have eaten lately, oy vey.

Today is game day. Tulane’s football team has really been rockin’ the start to the season with two crushing losses, but today maybe we’ll only lose by 20 points or so! Regardless, a time to tailgate is an automatic win in my heart. Plus I’ve already gotten one of the football player’s numbers, so score 1 (or should I say 7 because we are speaking football) for me, and score 1 for da Tulane football team bcuz they scored #me.

Tailgating was a success, as I met up with my Newcomb big and had fun dancing on top of a cooler underneath the tent of some frat.

I was happy to find out later on in the night that we ACTUALLY WON THE GAME! It’s a good thing we beat (insert name of other team we played here). It is so perfect that I can go to a school where tailgating for a game and then not going to the game is totally acceptable and normal, because obviously da best part of sports is da food.

After tailgating I went out with my gals to an Italian restaurant called Amici where I indiulged in a delicious penne alla vodka pasta and shared pizzas, but we waited 30 minutes for the check because our service was absolutely RIDICULOUS, so amici is a no go for next time obvi.

Also shout out to the rude girl walking behind my friends and I on the street last night as we were walking to The Boot who told us to “Shut the f*** up” various times because we were singing and dancing. Sorry that you can’t appreciate, “Walk Like an Egyptian” and you look like a grouchy hobo without shoes. Not my prahblem lady. Also, she screamed, “Tell me your names, I dare you!” Like hunny, if you are trying to black-list me from your sorority idgaf because I wouldn’t wanna be in it anyways #BURN. But she doesn’t know any of our names or faces anyways :)

I have FOMOOF: an abbreviation I created that means “Fear of missing out on FOOD”. I do not mind missing a frat party, but to skip the opportunity of having a pancake with caramelized bananas or a spicy pork poboy or shrimp mac n cheese with garlic bread crumbs or a bratwurst hot dog with sauerkraut and jalapenos or a melted brie and pear sandwich or penne alla vodka or a spicy tuna stuffed jalapeno or a blackberry crumble pastry is something I am not capable of doing. (These are all delectable food items that I have gotten in NOLA so far, and that’s not even naming them all). This is why I have FOMOOF. Da frats can wait while dis pasta is on ma plate.

I am in the midst of perfecting and finishing the interior decoration of my side of the room as Maddie is doing the same with hers. I am very impatient to do a blog post with pics of it, but I am waiting until I absolutely know for sure that it is perfect and pinterest worthy. Let’s just say it includes lots of washi tape and polaroids and patches and lights and colors and art hehe.

Sitting in a green chair in the LBC in my favorite place to study as I drink Lemonade Iced Tea in a cute black dress and blog instead of doing my homework as usual. I walked to Satsuma (a DELICIOUS restaurant on Maple Street) this morning for breakfast/lunch with some gals and later tonight I am going to Zumba and then having an Emmy’s party in my friend Emily’s dorm yay.

Yesterday Maddie and I took a lovely walk in Audubon Park, which is the park located directly across the street from campus. It was GORGEOUS and we ran through the sprinklers and chased geese and enjoyed ourselves. I am definitely looking forward to spending more time in Audubon and the A-quad on campus, which is an area I don’t walk around often because I don’t have class in many buildings down there, but it is by far the most beautiful part of campus.

Sitting in my Earth as a Living Planet Lecture but I am not listening because I don’t want to. Instead, I will upload this blog post.

For now I will get back to my work, but I will leave you with pictures and a quotes and highlights of the week:

I didn’t end up posting this when I had anticipated because I realized all the PHOTOS I wanted to share were not yet downloaded on my computer, but now they are! Today sat outside on a bench in the sun, earphones in listening to a spotify jazz playlist and enjoying the mild 80 degree weather as I read about the work environments of people in the creative industry as described in my book for my digital media class. I am falling in love with my campus more and more the more I explore fun places to relax by. I am also falling more and more in love with NOLA the more time I spend here in Louisiana, as I get to explore incredible places like Stein’s jewish deli and District Donuts and an adorable art shop where I got a fabu poster. Not only are the places awesome, so are the people. A hilarious man walked up to Maddie and I yesterday (Yom Kippur WHICH we had off for school because so many people here are Jewish) and asked us if we were Cali girls. He was clearly a NOLA local, but he told me with his tooth-lacking grin that he had grown up by Ventura boulevard in Encino, RIGHT near me. Such a funny coincidence. Liv luv NOLA 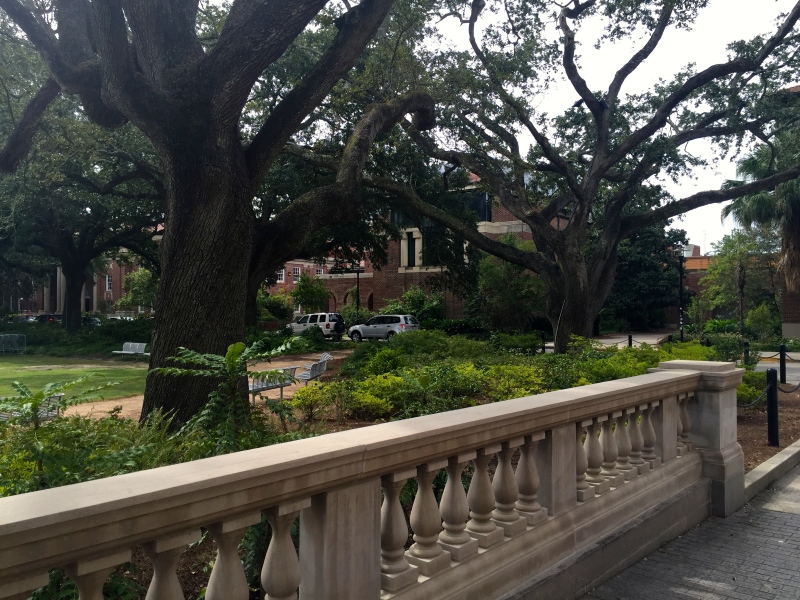 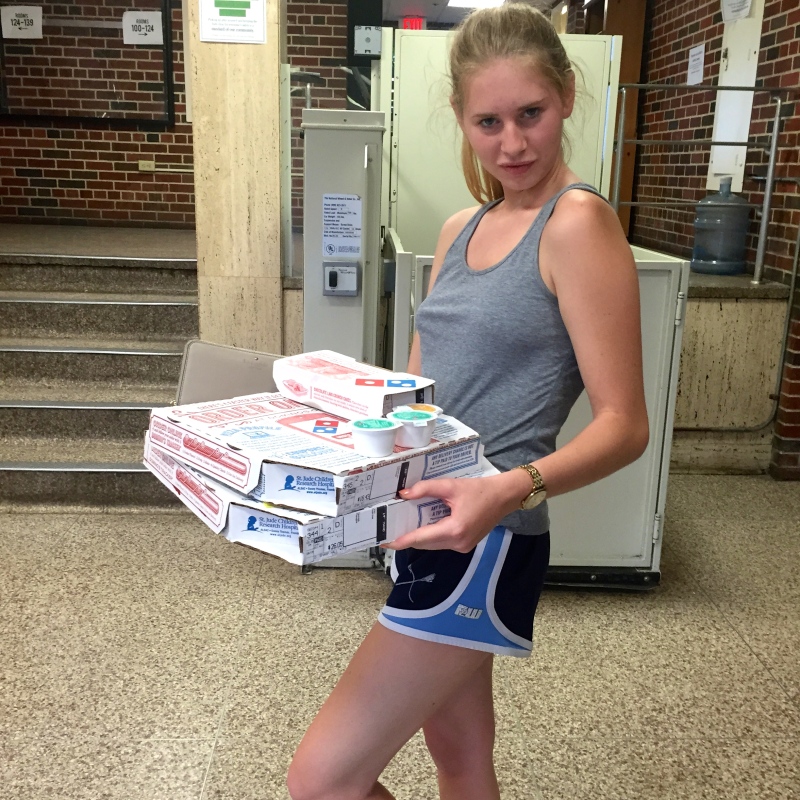 When DOMINO’S gives you TWO pizzas, but you only ordered one #swaggie

from left to right: Maddie, me, Sydney, Emily, Veronica and Haley 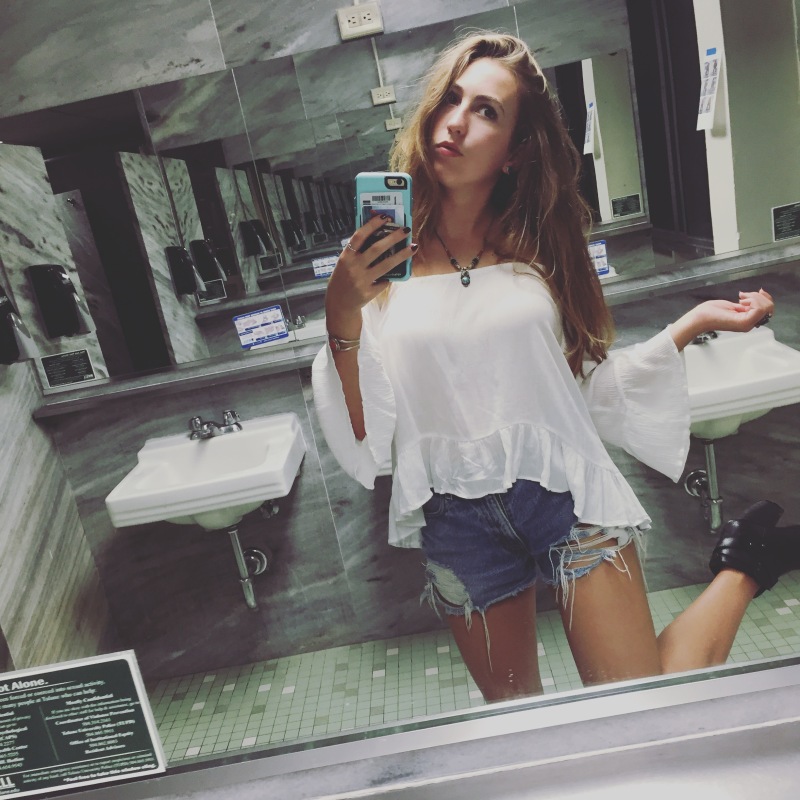 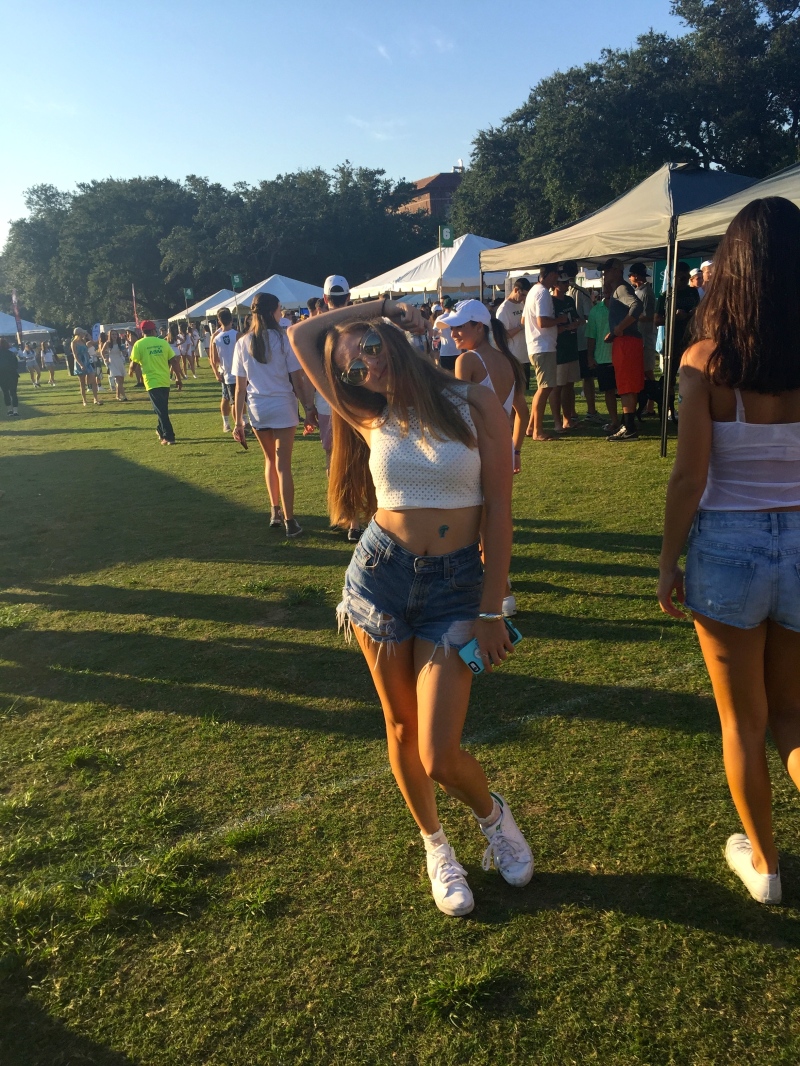 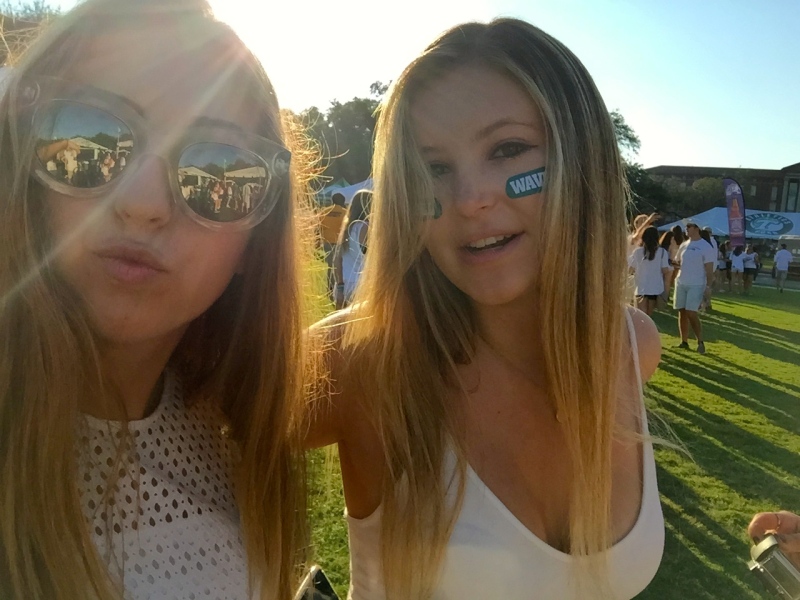 Me with my Newcomb BIG, Darby (in the middle) and her roomie on the left 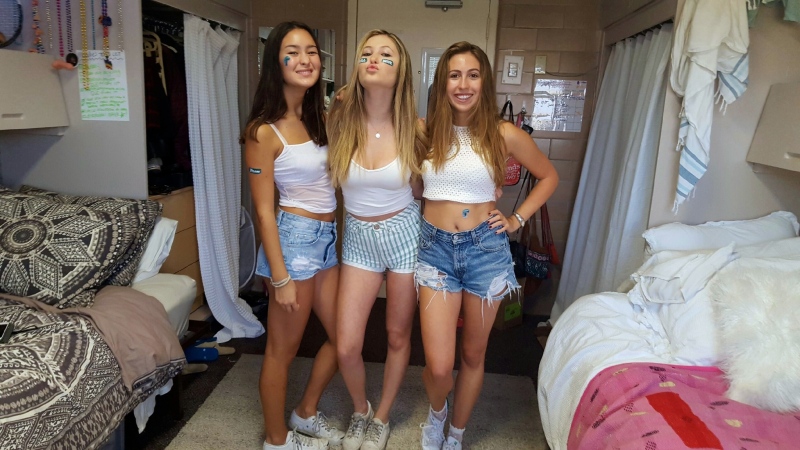 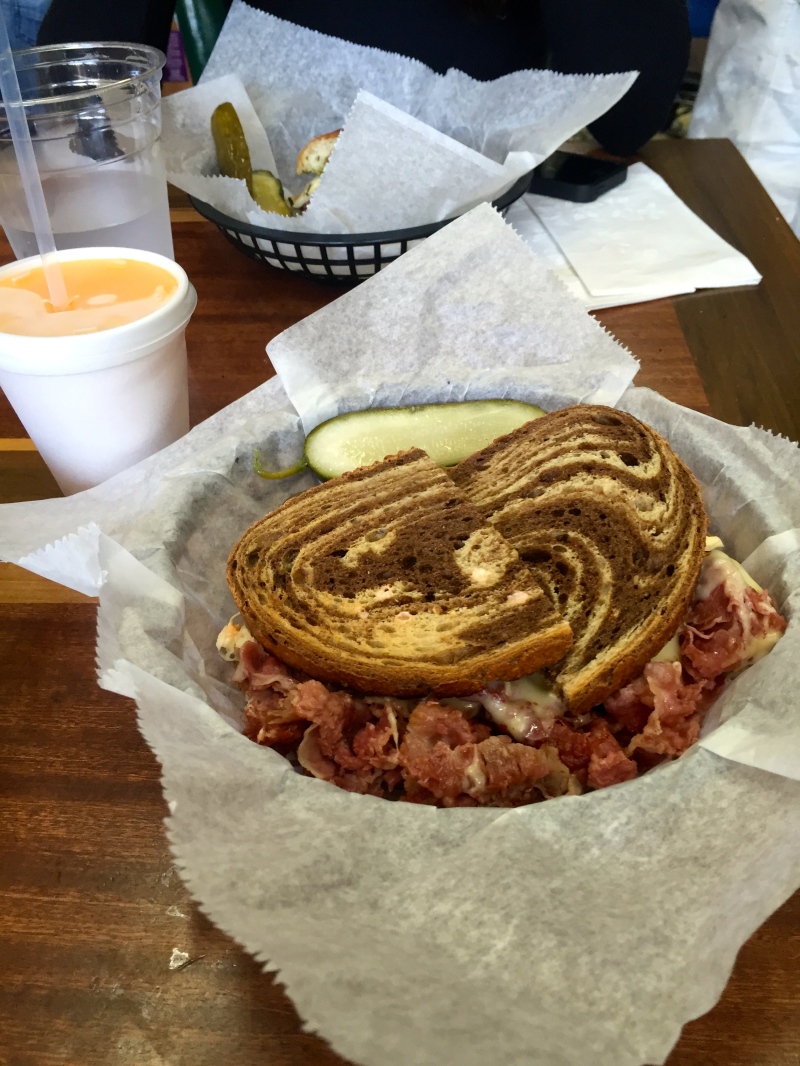 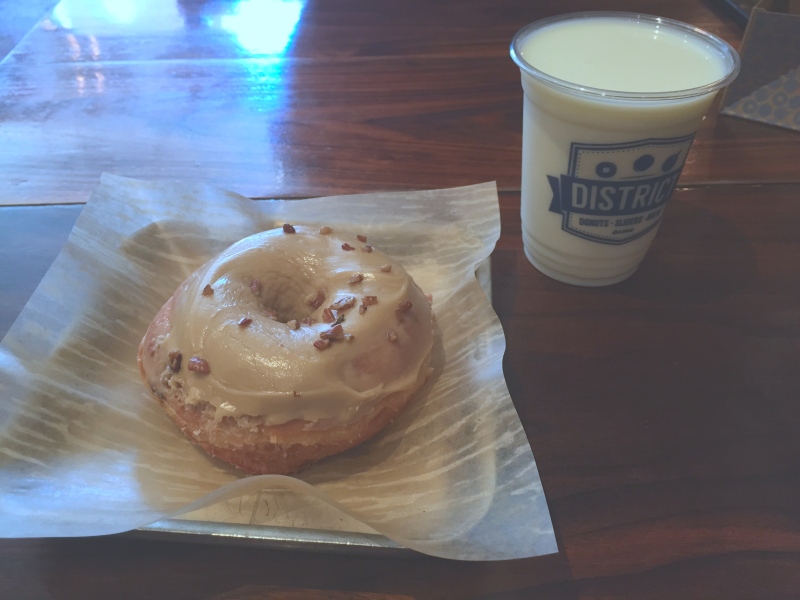 and why not a butterscotch pecan donut with a glass of fresh milk to top it all off??

The adorable shop where I got this awesome poster.. 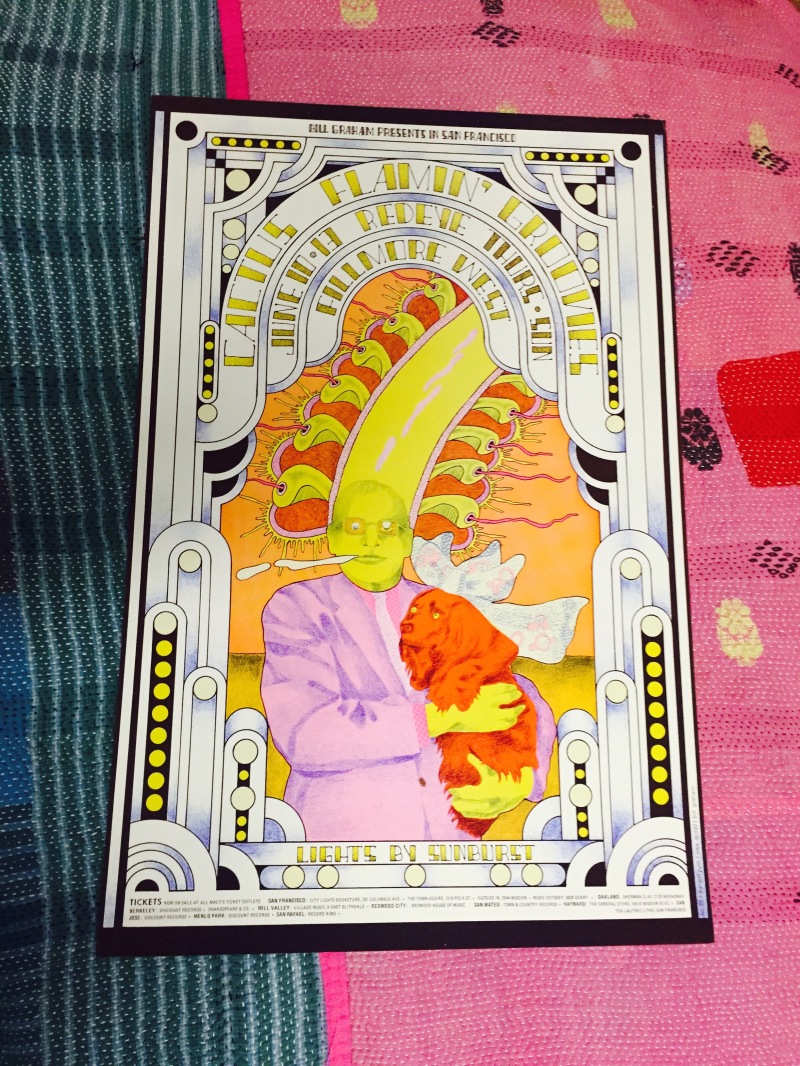 A fun, little diner with milkshakes that Haley, Maddie, Sydney and I walked by on our way to our nail appointment